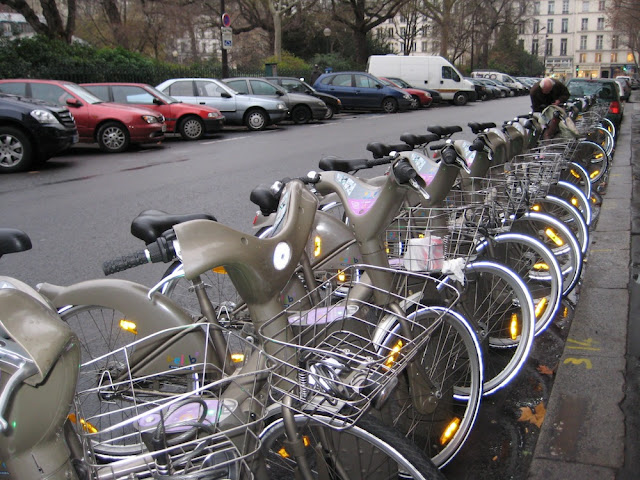 The bicycle’s comeback in France represents a willingness to make environmentally and socially sensitive choices.
After creating the world’s fastest mode of transport the TGV, the French are now returning to something much more simple — the bicycle (vélo in French). On July 15, 2007, 10,000 public bicycles were made available to the residents of Paris, in a new experiment on urban transport.
The basic principle is that nobody owns the ‘Vélib, but everybody can borrow one. For €29 and a deposit of €150, one can subscribe to a year’s access to the cycles. Vélib points have been created outside every metro station in the city. With a magnetic card in hand, one can simply help oneself to a cycle, use it to ride up to one’s destination and park it at the nearest Vélib point.
Experimental launch
It took three years of negotiations before the experiment was put into place but one week before the launch, nearly 8,000 Parisians had signed up for a subscription. The city expects to have nearly 2,00,000 by the end of the year. In the last seven years, Paris has doubled its cycle tracks to 371 km at present.
This emerging new trend has quite a serious impact on urban planning, as rules are changed to suit a growing population of cyclists. Instead of the motorcar, in some places the cyclists have priority, allowing them to use one-way streets and even ignore traffic lights.
Finally, it comes down to a personal choice that the French are making. Cycling is good for one’s health; according to some studies half an hour of cycling per day can significantly elongate one’s lifespan, reducing stress and hypertension. It is also an efficient tool of weight control. On the other hand, a cycle is a non-polluting form of transport, using no fuel and creating no emissions. Until a few years ago, only 1.5 per cent of Parisians used cycles on a regular basis. Now more of the urban French population is turning to a mode of transport very common in rural France.
The region of Arcachon, on the south west coast of France, offers several landmarks for tourists but, most of all, it offers an excellent network of cycle routes. These routes, which run along the sea for almost the entire circumference of the basin, originally formed a rail road track used by Germans during World War to transport soldiers and men. However, after the war, the railroad served little purpose and the path was converted into cycle tracks.
The cycle track that circles the basin is inaccessible to any motor vehicle, however small it may be. It covers a length of nearly 75 to 80 km and, on a sunny day, one can see people of all ages cycling.
Cycles are available in most towns on rent for as little as €2 an hour. A variety of cycles, tandem bicycles, three-wheelers and cycles with baby carriages, makes it possible for older citizens, mothers with babies and even the physically challenged to cycle. To make it easier for tourists, cycles rented in one town can be returned in another to the same chain of stores.
The enthusiasm to return to the cycle as a form of transport as well as a hobby is not limited to Arcachon. Gironde, the department to which Arcachon belongs, boasts of a network of nearly 600 km of cycle tracks. Bordeaux, the capital of Gironde, is a university town that gives all students free use of bicycles that belong to the town. Further north, Nantes offers free raincoats and backpacks to state employees who cycle to work.
The bicycle was also the centre of another innovative project in France recently. The project, Ch’ti-Ventoux, was aimed towards social and professional reintegration of six prisoners at the prison at Valenciennes. The project involved cycling up to the summit of Mount Ventoux to a height of 2,000m and over a distance of 1,500 km.
Therapeutic use
The brainchild of the prison director, Jean Paul Chapu, and doctor, Thierry Dazin, this project stemmed from their belief that sport should be used for therapeutic purposes and can go beyond just occupying the prisoners.
The reward was an assurance of employment after they had completed their prison sentence. The authorities approached several companies and finally located six who agreed to employ the prisoners. With this promise, the prisoners went on an intense six-month physical training both within the prison and then on short trips outside.
Sponsored by Foundations such as Decathlon and the Fondation Française des Jeux, this period of training inspired the prisoners to go well beyond their limits. For some who had never cycled before, this was quite a challenge. More importantly, it united the team. For the final run, a group of 30 people, including 15 on bicycles, reached the summit.
The bicycle is bringing revolutionary change to French society. It represents a growing social consciousness, as well as a willingness to make environmentally and socially sensitive choices.

You can read it here on the Hindu website ‘The latest French revolution’.