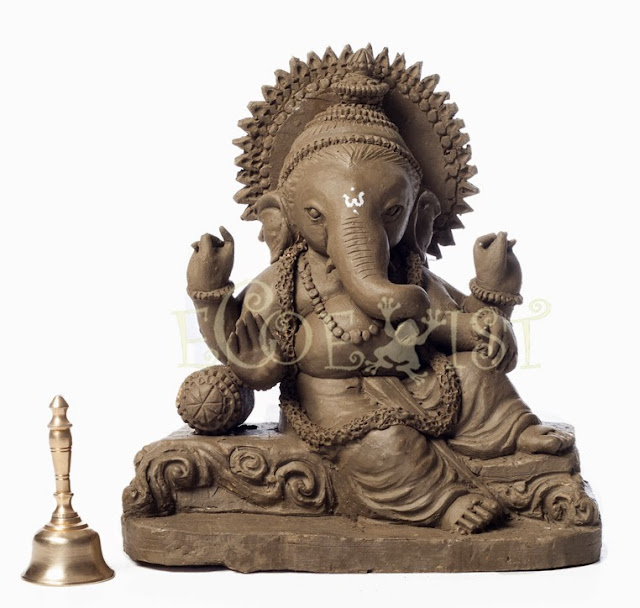 Where did the festival of Ganesh Chaturthi originate from? While it is difficult to have an accurate answer without the help of detailed historic studies, there are possible explanations that, as in the case of most traditions, turn in the direction of Nature worship.

Sri Vivek Godbole, Vedic scholar and founder of the Sri Krishna Yajur Vedpathshala in Satara, Maharashtra answers this query pointing to the fact that the festival falls in the month after the monsoons when the rains have washed up fertile soil onto the banks of the rivers. This soil is precious and worthy of worship and two other festivals around this time also involve soil.
He reminds us that for those communities whose agrarian lifestyles made them completely dependent on the fertility of the soil, it was indeed the most important thing in their lives. Farmer communities would bring a handful of this soil home to worship, and having kept in in their homes for a few days returned it to the river, in the faith that it carried their prayers and blessings in the flowing waters of the river. Slowly, forms of idols began to be superimposed on the soil, as people fashioned snakes during Nag Panchami, bulls during Bail Pola and Ganesha during Ganesh Chaturthi.
The original intention was to offer thanks to the Earth for everything she gave and to return to the planet what we have taken from Her. This explanation would also clarify the idea of immersion, ‘visarjan, as a symbolic way of completing the cycle and circle of life.
A powerful ritual, that reinforced our gratitude and respect for Nature, is greatly transformed when the materials we use in celebrating it are now industrial and non biodegradable. The tradition of crafting ones own idols at home, was soon taken over by communities of sculptors and then became a small scale industry with the introduction of materials such as Plaster of Paris and chemical paints. When idols made of such materials are then immersed into natural water bodies, they only bring harm to living beings and marine life by damaging the acquatic ecosystems. Mercury and lead in chemical paints and the insolubility of Plaster of Paris result in poisoning marine life.
Prof Asolekar, expert in water pollution and management at the Indian Institute of Technology, Mumbai published a paper nearly ten years speaking of the dangers of using chemicals and offering simple solutions to the problems they pose.
How do we revive the original beauty and connectedness of the ritual and look after our natural environments today?
eCoexist has been running a campaign for an Eco friendly Ganesh festival since 2007. Our first effort was to revive the art of sculpting with natural clay by looking for those artisans that were willing to still work with this fragile material. We taught children how to make their own idols and spent hours convincing sculptor communities to include a small production of natural clay idols in their activity.
In the last eight years, the campaign grew to include many sculptors from different parts of Maharashtra, a clean up campaign of the river during the festival and the inclusion of eco decorations to replace plastic and thermocol. We have been exploring the use of paper mache and also encouraging people to switch to permanent idols and doing a symbolic immersion with a much smaller natural idol.
We have found master sculptors in rural areas and encouraged their work as well as budding young sculptors in cities who can take up the cause in their work.
The awareness levels of the public have risen tremendously and today, making the choice of an ecofriendly idol is not limited to those who can easily afford it, but has become a matter of conscious choice even among the economically under privileged.
In August this year, the National Green Tribunal, directed all State Governments to issue fresh guidelines and directions to the District Administration as well as the local authorities to ensure that no synthetic or PoP material used idols is utilised for worship and subsequent immersion during the Ganesh and Durga festivals. This is a key order that will have an impact on the idol makers and the environment and will have to be implemented in a way that assures the large community of idol makers their livelihoods by giving them alternate skills.
While cities like Surat and Goa have long ago established bans on the immersion of chemical substances during festivals, it is now inevitable that other cities will also follow suit. In the increasing paucity of potable water we will have to become very careful with the way we treat our water reserves. Sculptors who a few years ago refused to make the change are now beginning to see that it is a wiser choice, even to sustain their business, as the markets are becoming more eco conscious.
For the Ganesh Chaturthi festival to become safe for both humans and the environment, many aspects will have to be addressed. Finally, just as Sri Bal Gangadhar Tilak, converted the festival into a powerful tool of social change during colonial times, it can now carry the message of environment protection.
To know more about our work visit www.e-coexist.com
To buy one of our idols in your city visit www.ecoganeshidol.com