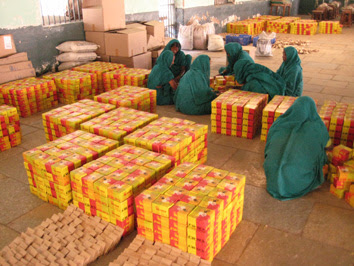 The packaging of natural colours for Holi brought some colour into the lives of women prisoners in the Yerawada Central Jail this year.

WHAT would the festival of Holi, a symbol of spring, of life and of colour, mean for someone serving time in a prison? For at least one group of prisoners in the Yerawada Central Jail, Pune, this year’s festival was different. It brought them an opportunity to earn some money.

The Kalpavriksh Environment Action Group coordinated a project around natural Holi colours for several years. As part of a campaign on safe festivals, Kalpavriksh worked with a group of women farmers in Sirsi, Karnataka to evolve a range of natural colours and promoted these natural colours, produced by the Malnad Seed Exchange Collective, under the name Rang Dulaar.For Holi 2007, nearly 1,500 kg of colour was produced. What’s more, the colours were packed by the women of the Yerawada Central Jail into over 12,000 packets and marketed by eCoexist products in eight cities all over India. The project emerged in response to a request for work sent out by the prison administration. The women prisoners are offered work as a means to earn some money while they serve their sentences and also to enable some of them to return the fines that they owe. The Yerawada Central Prison is known for its efforts in this direction, and produces several items, which are then sold at its marketing outlet near the prison. The products include durries, leather goods, and even bakery items. This year Kalpavriksh introduced packing of natural colours to their list of economic activities. Within the prison, Madhav Karve, Deputy Inspector General of Prisons for the Western region and Pallavi Kadam, Jailer Group II, Women’s Prison of the Yerawada Central Prison oversaw this work. The seven women, who were specifically employed by the project, worked over a period of a month. During this time the prison workshop came alive with the sight of the colour packets and the fragrance of the natural colour.

For those of us who worked directly with the prisoners, the experience was unique. For one month, members of Kalpavriksh went into the prison workshop on a daily basis, training and interacted with the prisoners. The commitment and diligence of the women we worked with was impressive and we slowly learnt to be at ease with them. We also realised that the past is a subject not to be discussed; the women in prison are coming to terms with the mistakes they have made. However, the future can be full of hope and such projects bring a glimmer of life. Finally, the experience also taught us the value of freedom and what it means to someone who has been imprisoned. By the end of the project we had reached a level of ease that allowed us to discuss ideas with the women. The prison workshop has facilities for several activities and the women have also been taught skills such as making candles, agarbattis, and handmade paper.

What is now needed is for groups to help them design and market products using these skills. Most women would like to be able to work and earn, and save some money to put aside for the time when they will be free again. The Yerawada Jail has even established savings groups and the women save up to Rs. 100 a month from what they earn.The work being done by Kalpavriksh and eCoexist aims to produce eco-sensitive products that are made through socially sensitive processes. The colours bring an eco-sensitive livelihood to the farmers of Sirsi, supplementing their farming income. The colours are now also helping urban groups such as the women prisoners to earn some money. Finally, they provide urban consumers a healthy and natural alternative and use occasions such as Holi to spread a little more joy in our society.