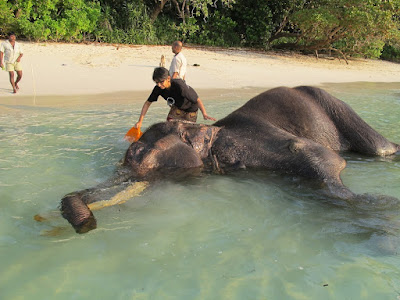 This time in Goa, I did something that I have never done in my life. I bathed an elephant. The Sahakari spice plantation in South Goa offers this unique experience. Ganga, the seventeen-year-old elephant, was born in the forests of Assam and came to Goa via a temple in Nasik. Along with Bapu, an elder male elephant, she now is part of the spice plantation team. After a walk through the plantation learning about organic farming and the unique qualities of each spice, we came upon the elephant team. I knew at once that I absolutely had to take up this offer to be at close quarters with one of my favourite animals! My husband, Michael, and I chose to bathe the younger Ganga.

A seventeen year old elephant is a baby by elephant standards, but nevertheless is still a large creature! We walked down with Ganga and her mahout to the stream that flows through the plantation and I had the feeling that Ganga was probably pleased. The afternoon sun is hot in Goa and this was surely a treat for her. Walking alongside Ganga and watching those massive feet sink into earth, I was struck by the gentleness that emanated from her gait. We reached the stream shortly and the mahout asked us to wait while she settled down. He led her into the water and asked her to lie down on her side and then invited us to join in.
Then began the sweetness. A bath is a very intimate affair and it must require a huge amount of trust on the part of the elephant to accept to be so vulnerable amongst strangers. I was reminded of the Hindu ritual of abhishek, the ritual bath, wherein the deity being worshipped is bathed while prayers and salutations are offered. The ritual bath involves all the senses and  touch is the central mode of offering. An abhishek may last several minutes and watching the act of bathing, one gets completely absorbed in the activity, the mind reaches a point of stillness and a deep personal bond is established. Finally, in several faiths, water is used for anointment, initiation and purification.
I didn’t realize it then but what we did really was an abhishek to this baby elephant.  Ganga was the epitome of contentment  as she lay in the cool waters. It was a wonder to watch her long graceful eyelashes, that sheltered her small inquisitive eyes. The flexible, sensitive and yet powerful trunk that threatened to douse us with a shower any minute! The large wing like ears and the massive rock like body seemed surreal at such close quarters. We splashed the stream water on her and scrubbed her thick skin dutifully, using plastic brushes and buckets. I think the brushes probably felt like a tickle to her, yet somehow we were the ones laughing all the time, filled with joy. We put our hands on her forehead and sent her many ‘thank yous’ for this once in a lifetime experience!
Finally, after half an hour of splashing around, Michael and I lay on her belly. And then we heard her breathe. Elephants breathe very slowly, the mahout explained and this is why they have a lifespan of almost a 120 years. Between the long inhalation and the whoosh of the exhalation, passed several minutes of silence as we waited in anticipation. We could have laid there with her like that for hours,..but of course all too soon, the bath was over.
I think I was happiest because for the first time I could offer something to an elephant that was truly for her alone. Each time I see an elephant in the city, far from its native home and family, begging for coins in thick traffic, I ask it for forgiveness for the immense cruelty that this noble species has received from humanity.
Soon it will be time to observe Ganesh Chaturthi. Ganesha, the diety is half man and half elephant, and he is one of my favourites, because to me, he embodies the coming together of the goodness in both humans and elephants. At the end of the festival, Ganesha is ritually immersed in water.. This year as I worship Ganesha, I will be reminded of Ganga. In the simple act of bathing her, I found a way to express my love and gratitude to the elephant species.
As for the ritual of bathing, take the time to bathe someone or something you love, a child, a pet or even a plant and see how close it brings you to them! Of course, make sure they are willing!!